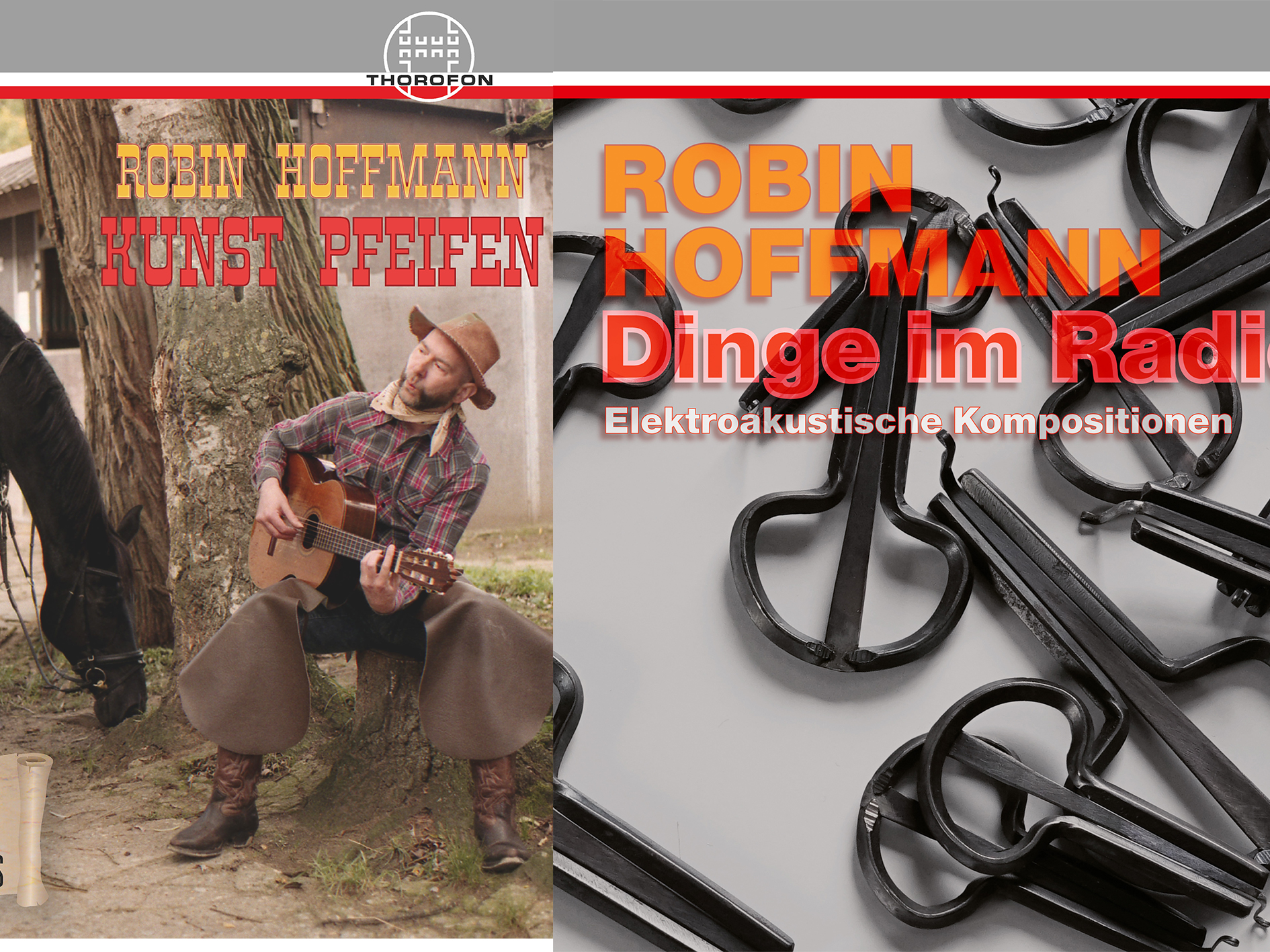 The work Maschinensingen by Robin Hoffmann is an audio collage of field recordings, a catalogue of city sounds of drills, roads, train announcements, water fountains, the organ in a cathedral, bells. The recordings are made at different times of the week in Fulda, a city at the geographic centre of Germany.  Robin Hoffmann’s work is indeed very, very German.

Maschinensingen is taken from the album Dinge Im Radio, which includes radio only pieces all commissioned and originally broadcast by Hessischer Rundfunk. Of these, Waidmanns Ruf und Widerhall contains cultural evocations of Germanness. It is a piece made from samples of birdcalls used by hunters and it evokes the forest, that symbol of nineteenth century German romanticism, as well as a “scene by a brook”, complete with gurgling water and bird song, surely a nod to the second movement of Beethoven’s sixth symphony. The text in the piece variously comes from the Dictionary of German Superstition, Der gestiefelte Kater by Ludwig Tieck, and quotes from the presenter at the German Championship of Deer Calling. It reminded me of finding a stack of BEEF! magazine at a friend’s parents’ house near Munich. The German Championship of Deer Calling? A magazine about beef? Who are these people? Hoffmann gets an extraordinary range of sounds out of these hunters’ calls. They sound uncannily like birds and wild boars in forests and caves but also screaming, babies crying, dial-up modems, fireworks, bagpipes, car alarms, dinosaurs and tires. The opening, which consists of extremely loud, high pitched and abrasive long notes, is particularly arresting and it is in this piece that Hoffmann’s densely controlled writing combines most effectively with his playful use of sound-making objects.

Birdcalls also crop up in Hoffmann’s piece for six voices, was stimmt, from the other of his two recently published albums, Kunst pfeifen. Hoffmann gets Neue Vocalsolisten to groan, hum, talk, shout and swoop like Formula 1 cars going round a track. It contains some gloriously abandoned singing: the crude, yodelling falsettos of the male voices recalling Eight Songs for a Mad King by Peter Maxwell Davies.

Schlundharfe from the cd of radio work uses electroacoustic music’s capacity to explore artificially constructed sonic spaces and places the listener, for the main part, directly in Hoffmann’s mouth. Schlundharfe is one of many examples across the two albums where Hoffmann explores the sounds of the everyday as well as an intentional amateurishness, wry humour and the banal. None of these are characteristics generally associated with the post-Adornian aesthetics that remain in the DNA of most German new music. The programme note in the CD booklet for Schlundharfe reveals the tension between Hoffmann’s playful side and the dominant German aesthetic. The piece may consist of the sound of 25 jaw harps resonating in Hoffmann’s mouth, but don’t worry they’re in “chromatic scale” – still dodecaphonic!

Hoffmann leans into this tense aesthetic compromise on the title track of Kunstpfeifen. The piece starts with 10 minutes of precise Neue Musik writing for new music ensemble, albeit with what Hoffmann describes as “arte povera” whistling over the top. The ensemble then start playing Morricone-style spaghetti Western filmmusic before Hoffmann sings a cowboy song about going to El Dorado, in an American accent. It’s an arresting moment of calculated banality that seems to be designed to generate a chorus of boos from the purists at Donaueschingen. But outside of that cultural context, who really cares? Hoffmann appears on the cover of the album with a horse, dressed as a cowboy, but I thought not of John Wayne but of Don Quixote charging at windmills, rebelling against nothing.

Straßenmusik and Schleifers Methoden from Kunst pfeifen are more like formal studies, for solo tenor trombone and cello respectively, exploring the glissando. Straßenmusik investigates the expressive possibilities of the trombone slide and starts with a gesture that sounds uncannily like an ambulance going past, complete with Doppler effect. Most of the duration of Schleifers Methoden is spent on the fingerboard of the cello, intimately recorded; you can hear the hands move after the string is plucked, shifting the pitches. I wanted to spend even longer with these sounds, but Hoffmann seems concerned the listener will get bored and both pieces lose focus as more modes of sound production are added.

The ensemble piece anstatt dass is made up of tiny pointillistic shards of material organised with a vigorous sense of rhythmic play reminiscent of Andriessen’s work. The inclusion of the guitar and drum kit gives the piece a pop flavor, but the instruments are played in the uptight way instruments from popular music are usually played in the context of new music. It is this sort of thing that reveals Hoffmann’s acts of aesthetic subversion as toothless. His music seems to be reaching, groping for a new language but he can’t fully let go of the expensive-sounding aesthetic. The result is that his work seems limited and hemmed in, densely referential with significance for people in the know, but narrow in its preoccupations and obtuse in its expression for everyone else.

The german translation of the position is published in Positionen issue #127, may 2021.