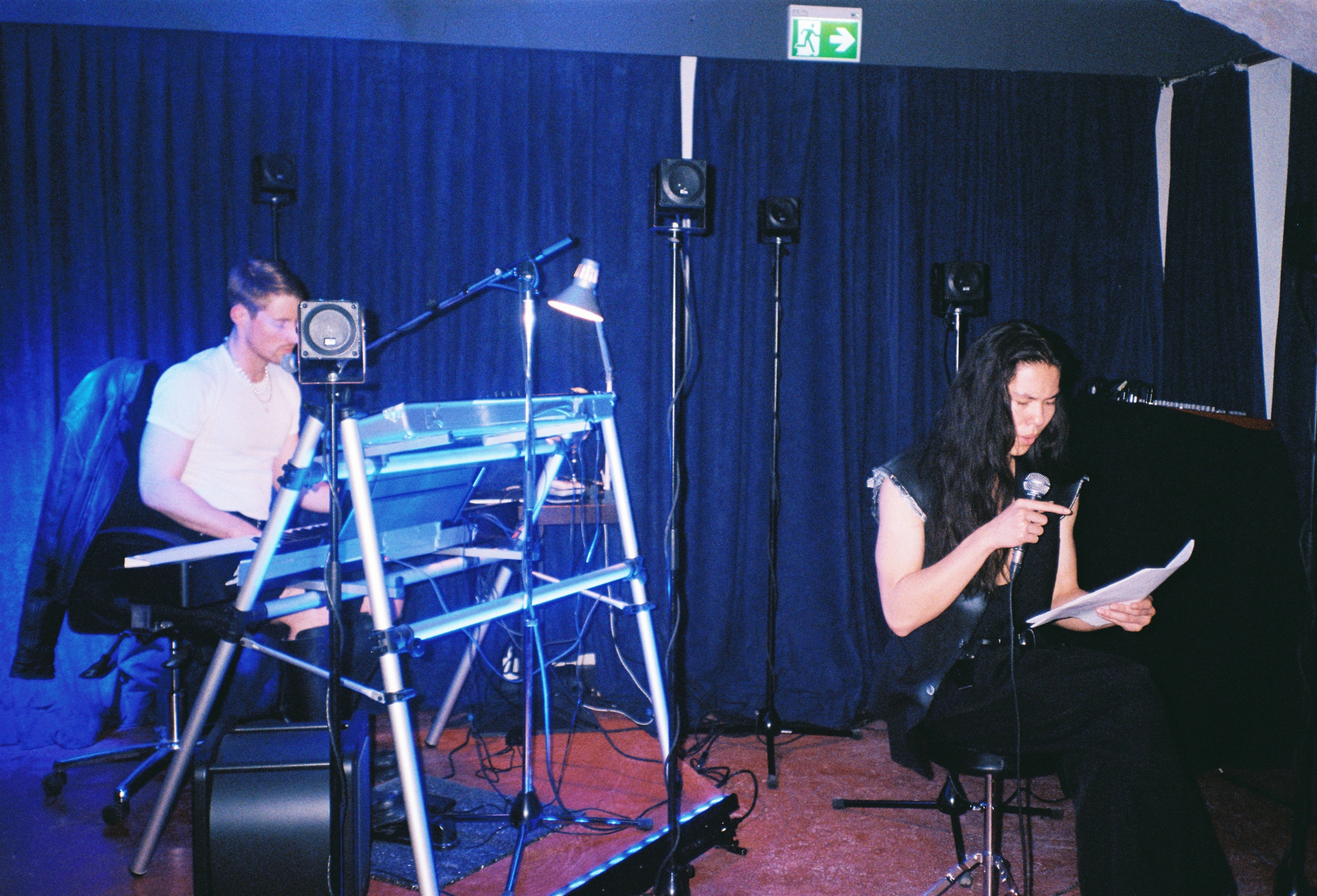 Spat from My Mouth: Piano Concerto

To spat from ones mouth implies, the mouth has been filled with something foreign, it is more than spittle it's something not of one's own body or mind but of another; physically cum comes easily to mind but also provocations,hymns, evocations, the melody of another filling the pallet of the mouth – tight full – clinging to the teeth, frozen in time, gagged until you decide to spit or swallow or spat. This urge to spat not spit or swallow begins the Belgium musician and performance artist Billy J. Bultheel latest intentional misreading of a traditional piano concerto. Bathed in blue light reminiscent of the 1920s cabaret dives that used to haunt central Mitte, Berlin, Bultheel takes up his office chair in front his keyboard, a sly smile to the gymnastic connotations piano concertos frequently draw upon. His body wrapped in a single white T and a string of pearls he time glitches the KW pogo bar. Beginning the piece, headdresses the audience with a soft voice acknowledging the disappointment they could feel at this faux concerto...but what he does have for his tightly crammed mostly art viewers is a machine. Built by his own hand that weaves and governs harmony through mathematical formulations, mysticism and medieval diapason.

The first sounds delivered into the underground cellar are reminiscent of a radio been tuned in, trying to latch on to that perfect frequency. The uncertainty lies in what medium Bultheel is trying to gauge; is it a purely physical modulation or something more abstract potentially even an incorporeal choir of beings from some life or another? As his concerto shifts through time and space, he seems to frequently sample the sounds of West-European Medieval Polyphony alongside early baroque and dark ambient metal. Electronic recordings litter his piano keys with dungeon-style synth and discordant overtones. The effect becomes industrially ritualistic and falls on the shoulders of the audience that overtime become ingrained into their bodies. Slowly the crowd begin to shadow-play a sculptural element to Bultheel’s work, as they nervously edge in their seats and crack their negroni filled glasses when the work hits garish metal melodies or deep ripping rites that sound like knives pulled across glass plates. Their bodies equally soften when Steve Katona joins Bultheel on stage for the last part entitled Threshold where he quotes the Italian Composer Monteverdi's Lamento della Ninfa which translates into »The Nymph's Lament«. Written in the early 17th Century it tells the story of a heartbroken creature on the cusp of both vengeance and submission as they battle with the powers of raw emotions such as infatuation and deviation.

This is not unknown territory to Bultheel his work frequently addresses power structures alongside collective and personal sentimentality. He previously worked on the last three scores for the German visual artist Anne Imhof’s operas which combine durational physical performances with Berlin’s underground keystone motifs. In the same vein Bultheel also showcased a new composition on the sunkissed rooftops of the ever-gentrified Kreuzberg as part of Schinkel Pavillon’s Disappearing Berlin in July this year. The piece featured electronic euphoric chords with counter tenor and tuba compositions based on extracts from Monique Wittig’s 1973 novel Les Corps Lesbien. Wittig is well-known for arguing against the segregation of ideas and values based on sexual preference or gender politics, she has been quoted to have declared »When I came upon the title, Corps Lesbien, the association of these two words made me laugh. It was absurdly sarcastic«.

These raw surreal dualities are not only the signature style of Wittig but also play a huge role in Bultheel’s framing from his stage setting to his sounds. He doesn’t only revisit these historical tropes such as the concerto virtuosity or human desire but he positions himself, his 21st Century body into a personal and physical battle with them.In a world that continually asks us to define »Who We Are?« Bultheel asks the question »Who Are We From and What is to Become of Us?«

A german translation of the text is published in issue #122.

Penny Rafferty
Penny Rafferty is a writer and visual theorist based in Berlin. Her theoretical essays and creative texts often traverse ideas of societal systems, new technologies and subcultural strategies. She was the in-house critic at STATISTA, Berlin in 2019 and is one of the co-founders of both Ishtar Gate and The Black Swan DAO.