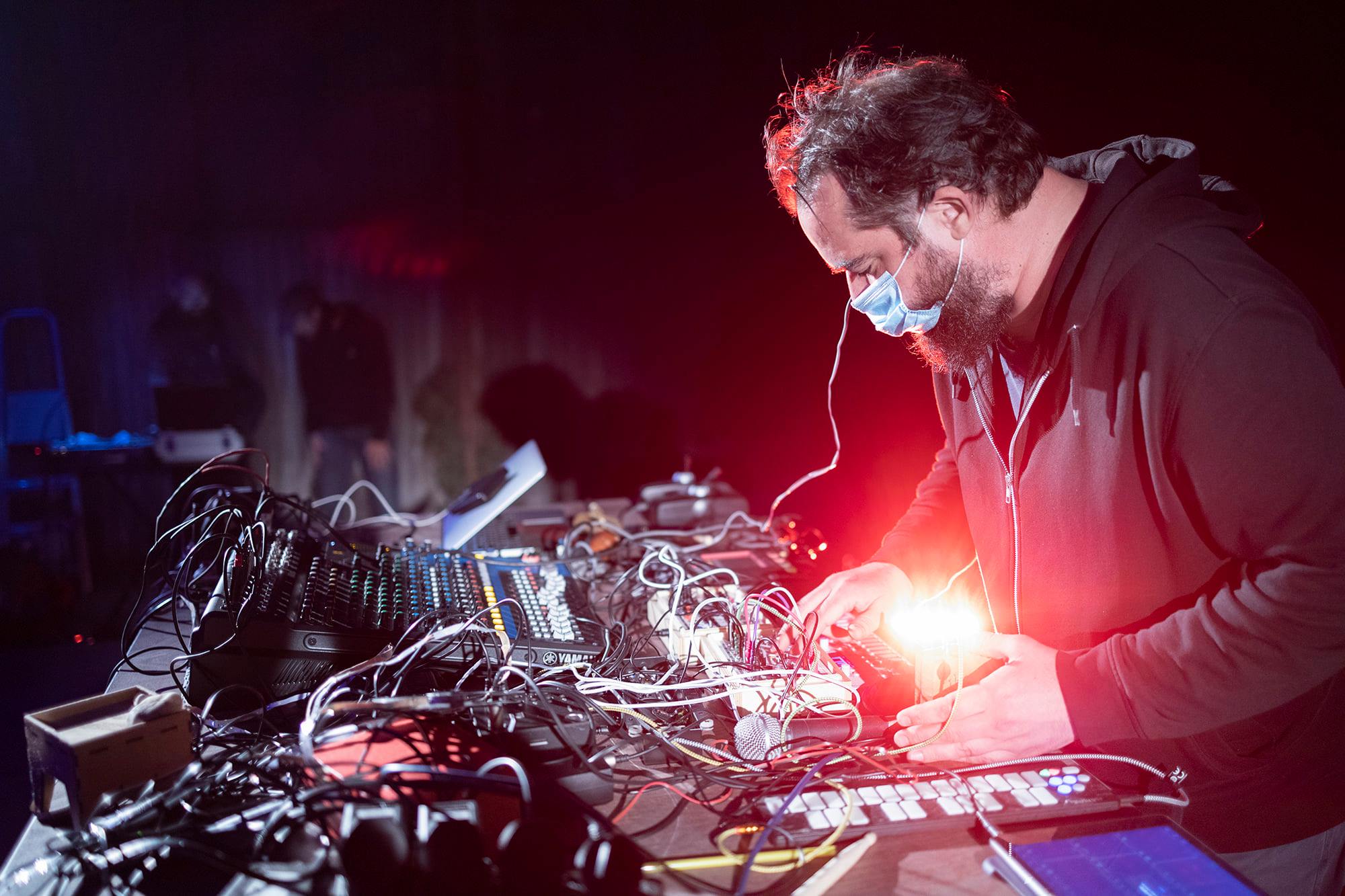 For fifteen years now, the interdisciplinary art and music festival Simultan has been a consistently solid output in both the Romanian and the international cultural circuit. Founded in 2005 by artist and curators Levente Kozma and Alin Rotariu, the annual Timișoara festival has slowly become an international favorite. In a global landscape where most media art and electronic music festivals (a genre in itself by now) seem to rehash similar line-ups, Simultan stands out with a more restrained but singular perspective. Its direction is more Ars Electronica than CTM, with video art as its choice medium.

It is important to consider the particularities of Timișoara, primarily a student and industrial city, and the geo-political circumstances that inform the festival. Its proximity to Budapest and Belgrade as well as it being part of the Austro-Hungarian Empire made it more attuned to Western trends than the rest of the country, from the samizdat access to foreign broadcasts in the highly restrictive period of the ‘80s to a penchant for collaboration with Vienna rather than Bucharest. It is also worth noting the existence of art collectives such as the Sigma Group or Kinema Ikon who were experimenting with art, technology, mathematics and expanded cinema in the ‘70s, creating the perfect circumstances for experimentation to flourish. The city is also the place where the 1989 Revolution started.

Most of the city’s iconoclastic spirit has been condensed around the festival. Much like the collectives of the past, some of the most talented creative minds have been centered by Simultan, dubbed a “transdisciplinary platform and festival for emerging art, research and artistic experiments”. Having a functioning collective and network of collaborators rather than a series of more diffuse events and initiatives often makes their efforts rather insular. In spite of the experiments in contemporary music of the late ‘60s and ‘70s, there was never truly an experimental music underground that crystallized locally due to a lack of infrastructure. With the Music Academy being mostly conservative and other music venues focusing more on jazz, guitar-driven or club sounds, experimental music has been relegated to the hybrid multimedia festival and art world.

Simultan’s close knit relation with video art can be traced back to its inception: Levente Kozma, the festival’s founder and director has developed his own appreciation for experimental and electronic sounds via his training in media art. In most art universities, the introduction to sound art or sound teaching is mainly used as a technical aid in video/multimedia production than as independent discipline.

Video art stands at the core of the festival’s international cachet: what really put Simultan on the map has been their sustained effort in showcasing the genre, also featuring an annual open call for video art. In a way, video is perhaps the most versatile and mobile art format, usually requiring very little to zero costs in terms of exhibiting. This has been a very smart move, making for impactful yet budget-friendly exhibitions. But video is not just exiled to the gallery walls, as many artists either integrate projections in their performances or creating elaborate A/V shows, conceptually tying in the festival’s interest in both visual and sound art.

As many other independent European festivals, Simultan heavily relies on funding for its existence. The festival has been applying each year for the same type of cultural funding, making for a fragile ecosystem. While keeping events free of charge might be a good incentive for attracting a wider audience and opening up a new generation of listeners, audiences become reluctant to pay in the future. In a country with a minimum wage of 400 euros/month, paying 10 euros for a noise show is simply unrealistic.

The festival’s music curation focuses on artists whose practice incorporate either a multimedia element or a form of computational or object manipulation/instrument building, encouraging unconventional materials and sonic diversity, as well as nurturing young and local talent. The result is a mix of noise, field recording, experimental electronics with a tinge of classic contemporary and electro-acoustic improvisation. Rather than try to attract big names, the festival has made a clever use of their underground position to showcase lesser known names from the loose DIY experimental touring circuit, focusing instead on maintaining a compelling presence over the years than aiming to expand. Notable names from past editions include Danish sound artist Jacob Kierkegaard, trans noise nomad Tara Transitory and Japanese multimedia artist Ryoichi Kurokawa.

This year’s extended 7-day edition was at once extravagant, celebratory and overwhelming. It reminded me of the Parisian festival Sonic Protest that uses the same template of one or two performances per night stretched across a week. This new format made for a welcomed opportunity to explore the city, however, when the performances were lackluster a different kind of fatigue set in, not that of being overwhelmed as in a multi-stage festival experience, but rather the wait for something interesting to happen.

Simultan’s precarious existence of relying on venues generally provided with the help of the local City Council (including an abandoned factory and a historical synagogue in the past) finally paid off with the city’s decision to offer them a space that was both central and versatile, while still temporary. The old garrison situation in the middle of the city’s second central square offered plenty of indoor space as well as a generous courtyard. The occupation of the garrison was a small political act in itself, as the City offered them the space as is, moldy interiors and junk included, to use and occupy before its renovation and transformation into a museum dedicated to the Revolution. “We’re actually squatting here” became the running joke during the festival, as the team spent months painting and cleaning. The yard became their saving grace with the challenges of putting on live events that ensued because of the pandemic. Director Levente Kozma emphasized several times that he really wanted to maintain having a physical festival, even if that meant often changing plans on the go and focusing on local rather than international acts.

This restrain became a blessing in disguise, in advertedly turning this year’s edition into probably the most comprehensive showcase of Romanian experimental music. The line-up included local legends such as jazzy-ambient group Thy Veils, melodic electronic improvisers Makunouchi Bento and A/Vcollective Psihodrom, as well as acclaimed veteran artists Sillyconductor and MicleușanuM. presenting new work. The younger generation was represented by acts such as the talented field recordist Simina Oprescu and even Spectralist rockstar Iancu Dumitrescu had new pieces performed in a special talk and listening session. While the early October weather was mostly mild, the occasional drizzle and cold evenings made for a challenging listening experience. It was Sillyconductor’s innovative set drawing from experiments from his long-spanning career that managed to keep things fresh and focused, as well as Makunouchi Bento’s A/V presentation titled “Science Night”, an homage to vintage visual-overload science documentaries that was especially conceived as more of an immersive durational interdisciplinary experience than a concert, although their particular brand of melodic ambient is especially engaging.

But the real highlight of the festival came during Austrian Peter Kutin’s strobo-noise set of light-sound feedback, when an exasperated neighbor started running his chainsaw on full blast. The effect was strange and disconcerting, as during the first couple of seconds the impression was that of his stereo set unexpectedly turning into a multi-speaker performance before locating the sound and piecing the whole incident together. Chatting with Peter afterwards, the discussion went from “I wish I could have invited him on stage” to jokingly envisioning a chainsaw duo in the future. It’s this kind of unexpected interactions that make the live music experience so special and impossible to replicate. The festival certainly felt like a bittersweet celebration of this now precarious privilege. Yet I feel like no matter what shape it might take in the future, their commitment to staying true to themselves will guide them in the right direction.

The german translation of this article will be published in issue #126, february 2021.