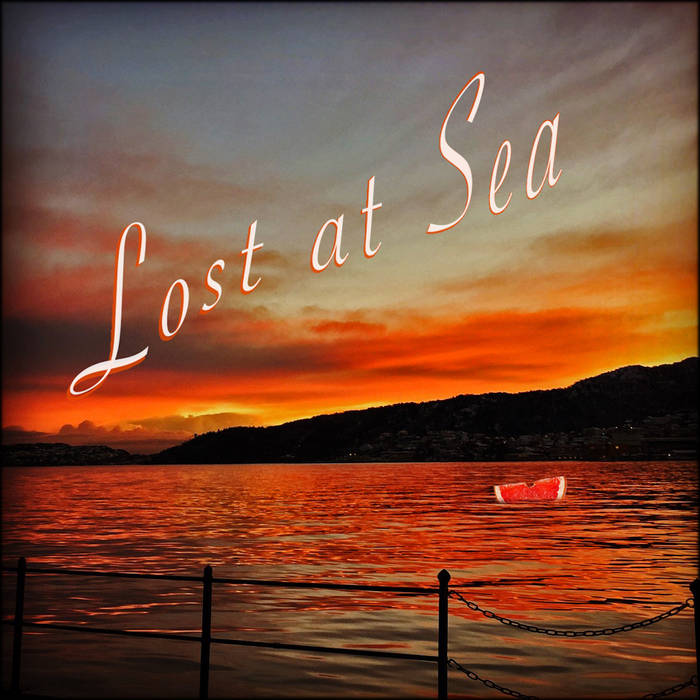 I was recently given a CD by a friend and as I don’t own a CD player, I had no way to play it. I also don’t own a record, cassette, minidisk or VCR player so I can no longer play physical media of any kind. The music I listen to is therefore almost entirely streamed from the internet by my desktop or phone. Ensemble Pamplemousses album Lost at Sea understands that this is how most of us consume music. It’s a hybrid audio and video album, written and performed by the six members of the collective: David Broome, Natacha Diels, Andrew Greenwald, Bryan Jacobs, Jessie Marino and Weston Olencki.

The album works best when it’s in one place. On Bandcamp you can hear all the audio and watch some of the video embedded in the format. »This is the future!« I thought watching Ation by Bryan Jacobs. Ation is a 4x multi-tracked video of a rotating motor attached to a bow that plays a violin. Hands manipulate a metal arm up and down the neck of the instrument and position the scrubbing bow on different parts of the bridge. The result is thrillingly relentless mechanised noise. The motor drives the bow to create an inhumanly vigorous, constant tremolo that produces chirping harmonics and occasionally more resonant pitches from the instrument. Sonically rich and pleasingly economical with its material, it’s an excellent piece. Similarly satisfying is Jessie Marino’s re-mappings i, a neat little study that sorts and develops a fixed set of physical gesture sending with a chorale.

Unfortunately you cannot see the whole of the album on the one platform and most of the videos on Bandcamp are actually trailers for longer videos housed on Vimeo, forcing the viewer/listener to toggle between the two websites. Ensemble Pamplemousse may have been forced into this situation by the fact that Lost at Sea is an unwieldy monster and with almost 3 hours of material it can feel less like an album and more like a content dump. »A content dump?« Pamplemousse seem to shrug, having included a 50-minute seaside mindfulness video on the album: »Well that’s the 21st century for you.«

Olencki’s video piece bent leans into the desktop watching/listening experience. It starts with the »loading« rotating circle of lights followed by an ad for car insurance complete with SKIP NOW in the bottom right hand corner, but as a cursor starts moving unbidden on the screen we realise the ad playing to Weston, not us, and the piece has already begun. The screen is then dissolved into increasingly glitchy and fragmented images of composerly desktop activities: YouTube, Logic and Max/MSP put in appearances as do pieces by his bandmates and word documents including Pamplemousse's biography. The piece, like Olencki’s other offering on the album, the audio only for melodicas, is a virtuosically abrasive combination of live and digital sounds. But for a piece that makes reference to the experience of being online and working on computers, the glitch aesthetic seems anachronistic. Do computers glitch anymore? Digital surfaces are disturbing because they are ubiquitous and work so seamlessly (until they don’t, but then nothing happens, not glitching). We are invited to fall into a digital reverie and forget that they are there, all the better to harvest our data. The glitch aesthetic is almost a nostalgic fantasy in 2019: Do you remember when computers actually broke down a little bit and exposed weaknesses and flaws that they no longer have?

Natacha Diels’ Excellent Good Beautiful swims through audiovisual culture with its mouth open, swallowing everything like the blue whales that feature repeatedly in the piece. We get jazz, Johnny Cash, Kate Bush, synchronised swimming, sitting down exercises, mindfulness exercises, guinea pigs, singing plants and much, much more. Despite some highly sophisticated manipulation of the audio and visual material it looks slapped together with ugly graphics, bad clip art and crass editing in a style I’m calling Crap On Purpose. In a time when you can film a whole movie on an iPhone and tweenagers are routinely uploading stylish little postmodern music-theatre pieces on TikTok, what is the point of this style? It purports to be about the experience of modernity and the internet but fails to engage with how the internet currently behaves and how we behave on it reverting instead to an outmoded »Internet Art« aesthetic which is no longer fit for purpose.

In the context of all this stuff it’s hard to make mental space for the more straightforward musical offerings. Jacob’s Crat combines the sounds of a stuttering printer with New Complexity piano and a boomy wall of bass. Andrew Greenwald’s A Thing Made Whole III is a highlight of the album; the ensemble largely layering harmonics, prepared piano and growling extended trombone techniques. Greenwald occasionally drops in lush piano chords with added 7th and 9ths, sometimes sounding like jazz and sometimes like Wagner; an unhurried but tightly controlled and surprising piece.

I greatly admire Ensemble Pamplemousse's rejection of good taste and their near total disinterest in seducing or charming the listener. Their work is demanding: You have to take the time to live in their astonishingly rich and detailed world and it’s glorious when you do.Their dense music demands repeated listening but their nervy, noisy, expansive work is not served well by the awkward presentation and the sheer volume of material.

A german translation of the position is published in issue #122.