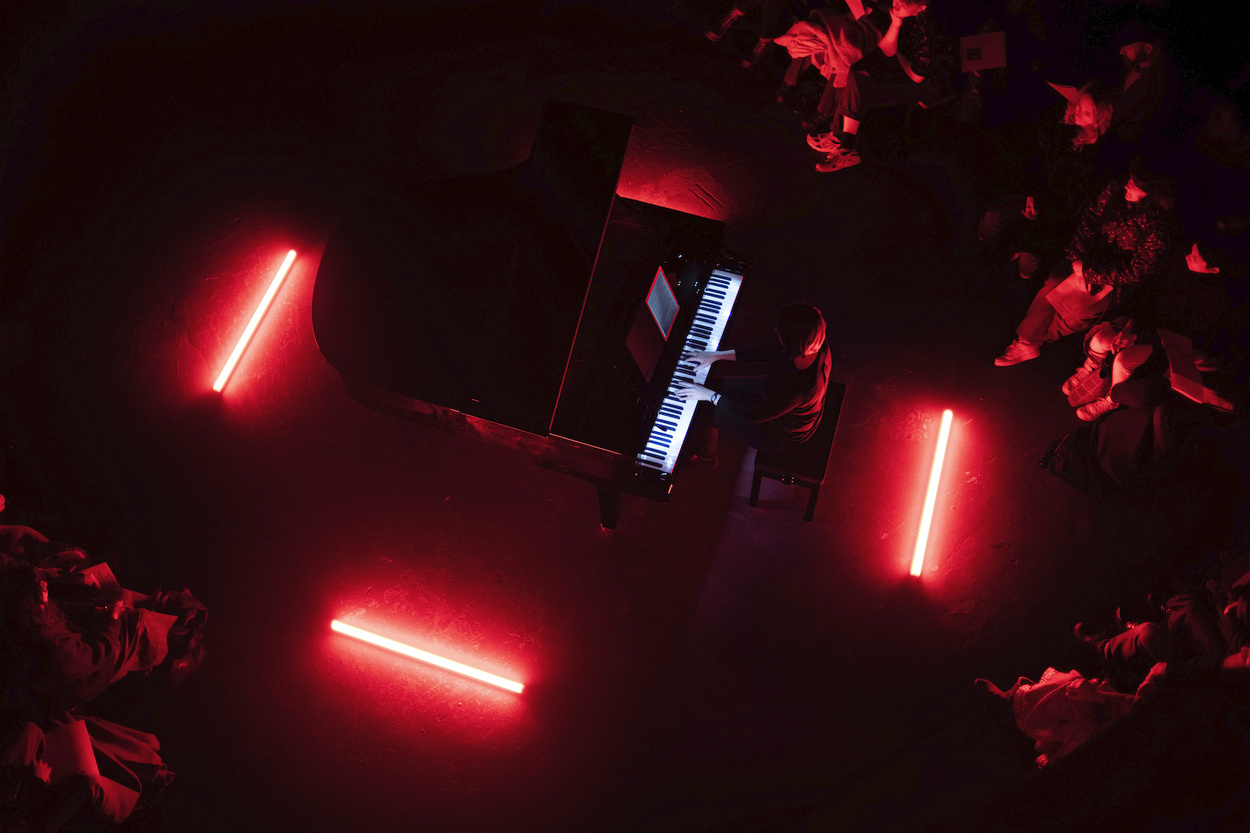 Now in its seventh year, the London Contemporary Music Festival (LCMF) remains the most improbable, frustrating and ambitious new music event in the UK’s capital city. London is too large to host a contemporary music festival in the normal manner: venues are too far apart, you can’t get anywhere on foot and any sense of festivity would be instantly swallowed in the crowds. For these reasons, since its founding in 2013 LCMF has always done things differently. Instead of short concerts running throughout the afternoon and evening between multiple venues, it puts on big events, one every evening, over the course of a week. Just one venue is used each year, and for the last few years this has been Ambika P3, a huge subterranean bunker underneath the University of Westminster that offers flexible staging, a resonant acoustic and a hip post-industrial aesthetic. LCMF calls itself a festival, but it is more like a concert series than anything on the well-trodden European circuit. Even its place in the calendar – in inhospitable mid-December – seems designed to set it an awkward distance from the rest of the world.

Most new music festivals are more like trade fairs than concerts: programmes are put together to advertise musicians, composers, new works to audiences of festival directors and ensemble directors, who will hopefully programme some of it themselves. LCMF pays little attention to this part of the new music machine. Directed in recent years by Igor Toronyi-Lalic and the composer and conductor Jack Sheen (in collaboration this year with the curators Irene Altaió and Inês Geraldes Cardoso) it focuses instead on thematic programmes that reach between genres of composition, performance and art, and back across several decades of sonic art. The only hint of convention this year came in the form of Jennifer Walshe and Timothy Morton’s TIME TIME TIME on the fifth night, a 90-minute music theatre piece that LCMF and the Serpentine Galleries in London co-commissioned with the Borealis, MaerzMusik, Sonic Acts and Ultima Oslo festivals – although "convention" seems a strange word to use for a work that is so exceptional and extraordinary, and one of the musical highlights of 2019.

Each year’s LCMF also takes a theme. This year’s concept of "Witchy Methodologies" (borrowed from a 2017 ICA conference of the same name) highlighted forms of enchantment, mystique, haunting, gossip and ritual. It was also a theme that foregrounded numerous female artists and performers, and embraced commissions not only from Walshe, but also Eva-Maria Houben, Alwynne Pritchard, Bhanu Kapiland Rohini Kapil, Cerith Wyn Evans, and Angharad Davies, as well as Jonathan Burrows and Matteo Fargion’s first orchestral work, Let us stop this mad rush towards the end, and a piano and film collaboration between Michael Finnissy and Adam de la Cour, Hammerklavier. For her piece, Houben joined pianist Siwan Rhys in a 45-minute duet for piano and organ. While Rhys played occasional chordal interjections, Houben offered an attenuated bed of long, hushed organ tones. I found this an unloveable piece: the instruments seemed to be working at cross purposes, and Houben’s organ part was neither busy nor minimalist enough to be interesting. Instead it buzzed just on the edge of attention, like a fly against a window. I would like very much to hear the piano part to Finnissy’s Hammerklavier again (played by an heroic Zubin Kanga, who gave the premiere of Pritchard’s Heart of Glass in full drag two nights later). Like so much Finnissy, it was dense with allusions and juxtapositions, with what I sensed was an unusually warm tonal palette. Yet de la Cour’s film – a collage of vintage gay erotica and footage of Sviatoslav Richter playing Beethoven at the Royal Festival Hall in 1975 – was too distracting in its own right. Music and film were supplementary to each other, rather than complementary. It may have worked better to have experienced both separately.

"Witchiness" extended also from the more obviously eerie performances of Cosey Fanni Tutti (reprising her recent album TUTTI) and legendary improv vocalist Maggie Nicols, to Cassandra Miller’s digitally enabled eavesdropping on and deconstruction of Italian folk song in her Duet for Cello and Orchestra, premiered at Glasgow Tectonics in 2015 and given its London premiere here. Miller’s sumptuous piece – played superbly by the LCMF Orchestra and cellist Anton Lukoszevieze, in a part originally written for Charles Curtis – was a highlight.

One of the features of LCMF is that you must take the rough with the smooth, and the same concert featured two curatorial missteps. The fact that these two items came after each other at the start of the evening compounded the issue. It was 45 minutes before we heard any music at all, and the comical rendition of Louis d’Heudieres’ charade-like Laughter Studies 6 given by An Assembly was a great relief. Before this, poet and scholar Holly Pester gave a talk on the traditions and origins of "gossip". It would have been an interesting addition to an academic conference, but here it lacked the necessary performance aspect to make it anything more than a lecture, read from a sheaf of papers, no less.

Before Pester’s talk came a recreation of Vito Acconci’s 1972 artwork, Seedbed. For his original performance, Acconci lay under a false gallery floor, where he masturbated for eight hours a day, listening to the sounds of those walking above him. Shock value – and Acconci’s sheer endurance – have made Seedbed notorious. Its power as an act of eavesdropping, debasement and primal physicality have made it a legendary work of performance art. Its success stems from the loop of complicity it created between artist and observer: as Acconci would recite from his onanistic hideaway: "I’ve done this for you, I’ve done this with you, I’ve done this to you".

For LCMF’s reconstruction, the artist Rowland Hill (a regular LCMF performer) substituted for Acconci. The audience sat either side of a catwalk stage, facing each other. Through speakers around us we could hear the sounds of Hill apparently masturbating. It was possible to walk on the stage, although few people actually did this; when they did, their footsteps were amplified through the same speakers, having been picked up by the same microphones. At least, that’s how it seemed. Yet in fact not much was clear: it was never made clear where Hill was (I looked for her appearing from under the stage after the performance, but didn’t see her). Was she even there at all? Were we listening to a recording? What was performance and what was real? Nothing anyone did above the stage seemed to have an impact on the sounds supposedly coming from below. The "you" of Hill’s ecstatic exclamations didn’t seem to be any of us. As I tried not to catch the eye of anyone sat opposite, I certainly hoped it wasn’t me. Acconci’s profoundly political upending of responsibility and collusion became a neutered twenty-first essay in surveillance and the hyperreal – even if, by substituting a male performer for a female, it might have had something to say about contemporary gender politics The work had already begun when we entered the space; it seemed to end not as might be expected, but just when a given amount of time (a lot) had elapsed.

The presentation of another piece of classic sound art was more successful. The second night of LCMF began with Susan Hiller’s Belshazzar’s Feast (1983–4), given in its original campfire version. Four television screens were place on the floor, facing outwards. Benches were arranged for the audience in circles around them. I found a seat towards the outer edge of the circle, but someone I knew nudged me to sit on the floor inside the circle. "For that campfire energy", he said. He was right. As Hiller’s TV screens began to show footage of orange flames, against a soundtrack of crackling wood, half-remembered Bible stories, and improvised folk songs, we all leaned in, as though warming ourselves on the cathode-ray glow. The atmosphere was uncanny: the feeling was of a campfire, but without a campfire present, only its mediated resonances.

That uncanniness continued into another part of the same evening: performances of music by the spirit medium Rosemary Brown (1916–2001), which she believed had been dictated to her by Chopin, Liszt and Schumann. These were nondescript things: too full of errors in voice-leading, awkward transitions and lopsided rhythms to be the real thing (although good enough to pass as decent pastiches). Yet performed with complete earnestness by Rhys, under spectral red lighting, they filled the room with an atmosphere no less than Hiller’s video piece: this time, of the Victorian salon or séance rather than the primeval fire. Brown’s four pieces were interspersed between two performances by Nicols, on voice and drum, including a lecture of her own that was truly performative and that culminated in a magical rendition of John Stevenson’s Sustain Piece for the entire audience. Weird, revelatory, discomforting, brilliantly curated: this was LCMF at its best.

The german translation of this position is published in issue #122.