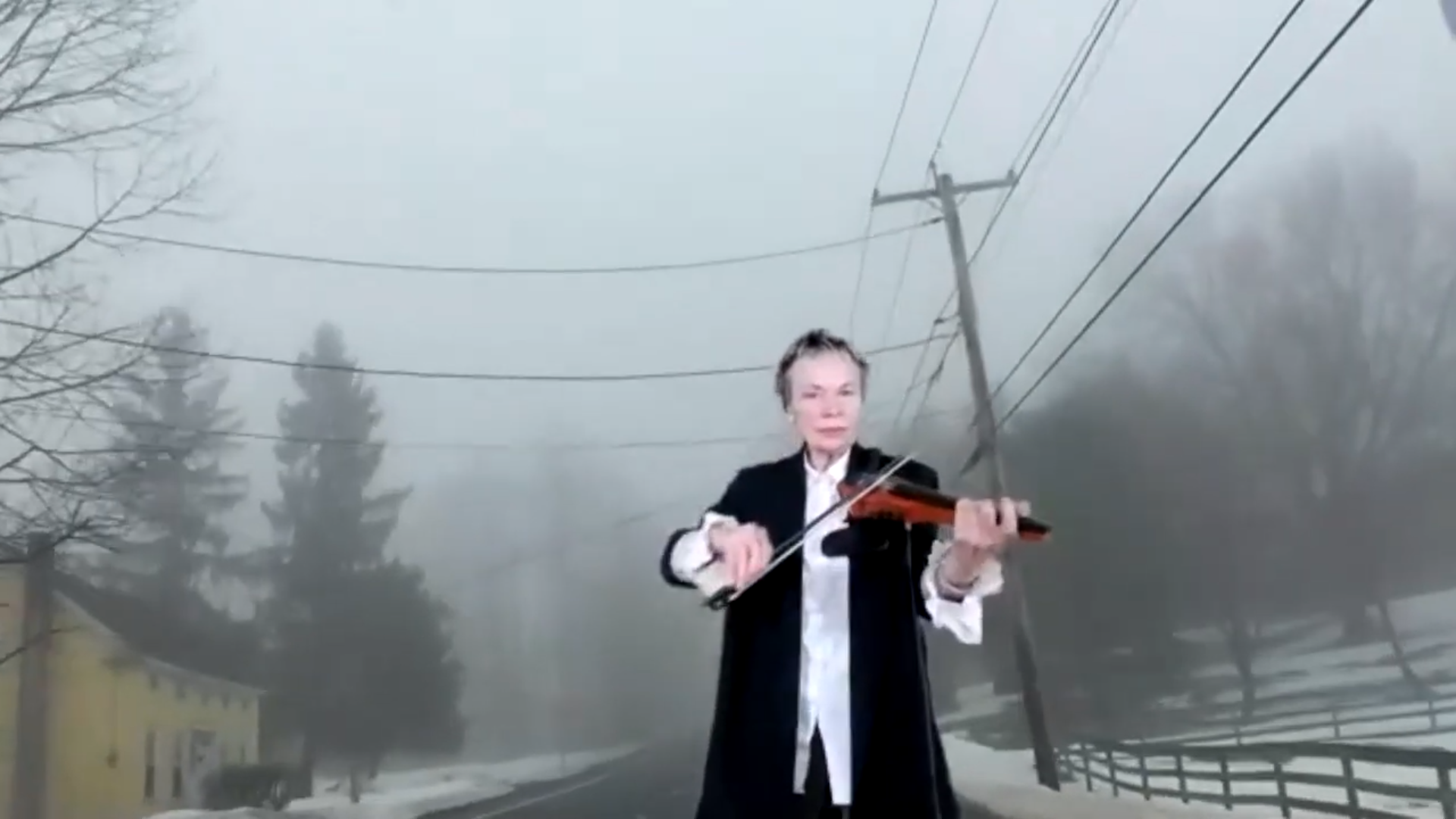 Spending the War Without You

Laurie Anderson has for decades been analyzing and criticizing contemporary society and culture, the world of ‘corporate America’, and stereotypes in there presentation of female figures and voices on stage. Recently she was invited to give six online lectures at Harvard University as part of the Norton lecture series, a series that has already hosted many important creative artists of our time, working in different media. The first three lectures were made available via zoom and later via YouTube.

In a year submerged by online meetings and talks, remote teaching/homeschooling, live and ‘on demand’ streaming and otherwise remediated presence/absence, Laurie Anderson’s first lecture Spending the War Without You:The River stood out in sharp profile on the horizon of our web-based life and dispelled the fatigue provoked by that life through its originality, immediacy, provocation and optimism.

The ‘story’ begins with an anecdote about how once at a technical rehearsal the festival promoter approached her and asked if Loni was there, meaning Loni Anderson, of whom he was allegedly a big fan. Laurie accepted the gaffe and promised to bring out the mysterious Loni, hoping that at some point the man would get tired of waiting... As the story begins, instead of Laurie Anderson we see a young blonde with long hair: it is indeed Loni, who uses Laurie’s voice. Or is it the other way around, with Laurie using the imaginary Loni’s persona as the prototypical focus for a critique of macho desire? The blonde brings this anecdote to a conclusion with two unexpected questions: What kind of war is this? What time is it? Those questions are repeated later in the lecture. The perspective of life in an age of pandemics suddenly enters this anecdote like a blast of cold air: isolation, illness, fear, uncertainty, mistrust, egoism, and the loss of meaning. How might we use them for something better, more optimistic and creative?

The River is a “lecture performance”, a lecture performed as a spectacle, with music, videos, photographs, theoretical and documentary references, virtual and recorded landscapes. We watch Laurie Anderson talking about life by the Hudson River, whose flow has influenced her mode of thinking and her music making. It also influenced her late partner, associate and husband, Lou Reed. Anderson mentions Reed on several occasions as an inspiration and support, someone who is always with her and whose opinion still has a great influence on her. Another constant presence in these lectures is that of nature: the river, the forest, the rocks, the birds and other “non-human people“ (to quote the philosopher Timothy Morton, who moderated the online discussion with Anderson following the second lecture).

The topics Anderson touches on are diverse and fragmentary. She talks about the radio as an ideal medium in a time of pandemic, about the pandemic as an ideal environment for reading and books, and about improvisation as a principle that is valuable both in music and in life. She mentions Buddhist meditation rituals that help with concentration, remembers several catastrophes (including floods, plane crashes, and especially the landing of US Airways flight 1549 on the Hudson river in 2009), and offers insights into pandemics from different stages in history. She re-examines stereotypes of female and male voices, and at one point holds a small speaker in her mouth while at the same time singing and producing violin-like sounds with the help of some hidden device or software. She herself becomes a playing/singing cyborg. After hearing this unusual singing, the figure of Fenway Bergamot, Anderson’s male alter ego, whom she often uses in her performances, comes to mind. Although Fenway did not usually sing as a violin (at least not in the performance of Homeland that I witnessed in Lisbon some years ago), the artificiality of his ‘constructed’ male voice, produced with help of electronic procedures, resonates with the singing violin-vocal demonstrated in The River. It comes as no surprise that at some point towards the end of Spending the War Without You: The Rocks (the third lecture), Anderson speaks with the voice of Bergamot, so that we get to know him in person.

Anderson has always been inspired by stereotypes as she explores the relationships that exist between what we see and what we hear when someone is speaking or singing. At the same time, she is prone to ridicule all kinds of authorities, and especially male authorities.Thus, at some point in The River, an animated portrait of Sigmund Freud appears, followed later by a portrait of her friend and collaborator Brian Eno. Anderson speaks through these animated images. She uses and manipulates her own voice, almost as a kind of aural apparition.

Whose war is this? Freud asks, repeating the question of Loni Anderson. It might be the culture war: between high and low, academic and popular, rich and poor, those with a voice, and those without? The situation we live in now looks like a war, but it is not possible to be sure about the identity of the warriors, or about what exactly they fight for. In the age of post-truth and mistrust this question seems to bean extremely interesting and relevant one.

In the second lecture, Spending the War Without You: Virtual Backgrounds: The Forest, Anderson also mentions John Cage, Dante Alighieri and William S. Burroughs. She talks in a tender way about her friend Trisha Brown who is struggling with disease, and forgets Laurie’s name, but who still communicates intensively with her. There are also several impressive scenes related to Laurie Anderson's artwork, where she ‘dances’ with a video-excerpt of her younger self. Although Anderson is physically alone on this virtual lecture-stage, many people are always there with her. In the third lecture Spending the War Without You:The Rocks she again refers to Burroughs, Lou Reed, Virginia Woolf, Fiodor Dostojevsky, Andy Warhol, Ai Weiwei, Herman Melville, James Joyce. She insists that all these lectures are not about her art but about "how things are, and what they are" – what the world is, how it exists and why.

In The Rocks Anderson talks mostly about words, writing and language; about speaking and the voice. Just where writing comes from is one of the interesting questions raised. This lecture might be the most self-reflexive of the three. All kinds of adventures experienced by the writer are mentioned, with intriguing examples always brought into the discussion: the online availability of libraries, a project based on fighting writer’s block by using a Dostojevsky novel, finding the hidden parts of someone’s lives in someone else’s lyrics (Anderson talking about her grandfather whose life she understood only through the poetry of Bob Dylan), coding and decoding, ancient stories, writing in collaboration with a super-computer, speaking in other languages. Anderson’s fascination with language as a virus (quoting Burroughs) is certainly given a whole new perspective in the age of pandemics.

At one point in The River Anderson mentions that we are all walking into the future, and that it is normal for the people and events waiting there to loom larger as we get closer. But in a pandemic, she claims, the figures waiting on that road become smaller, obligations are postponed and cancelled, the future disappears. Stepping forward becomes an act of faith, she argues. Those lectures in which her concerts, improvisations, films, stories and dreams are featured, together with her portraits of nature and virtual reality, are also for her a form of proof that the future still exists, but that we just have to find it, probably first in ourselves.

In her documentary Heart of a Dog (2015) Anderson remembers the moment when her beloved dog Lolabelle, walking in nature, realized that the hawks were about to attack her. She remembers the dog’s look of astonishment as she realizes that danger can also come from the skies: “I mean, I never thought of that.” As in that film, Spending the War Without You mixes fragments of Anderson’s music, narration, documentary footage, drawings, scenes from nature… Judging by the huge interest that the online Harvard lectures provoked, it seems that after long hours of zoom meetings, teaching and conferences, suddenly many of us shared Lolabelle’s look of surprise when we realized that this lecture performance, concert, documentary, art talk can come by way of that very same ‘zoom’ with which we were so disenchanted. Although the lectures resemble Anderson’s previous works in structure, the appearance of that collage structure via zoom, and in a site associated with the academic lecture, had a decisive impact: I mean, I never thought of that. But this surprise has nothing to do with fear; it is all about the pure joy of living.

The last three lectures in Laurie Anderson’s series Spending the War Without You will follow in the fall 2021.

This position is published in german translation in Positionen issue #128, August 2021.