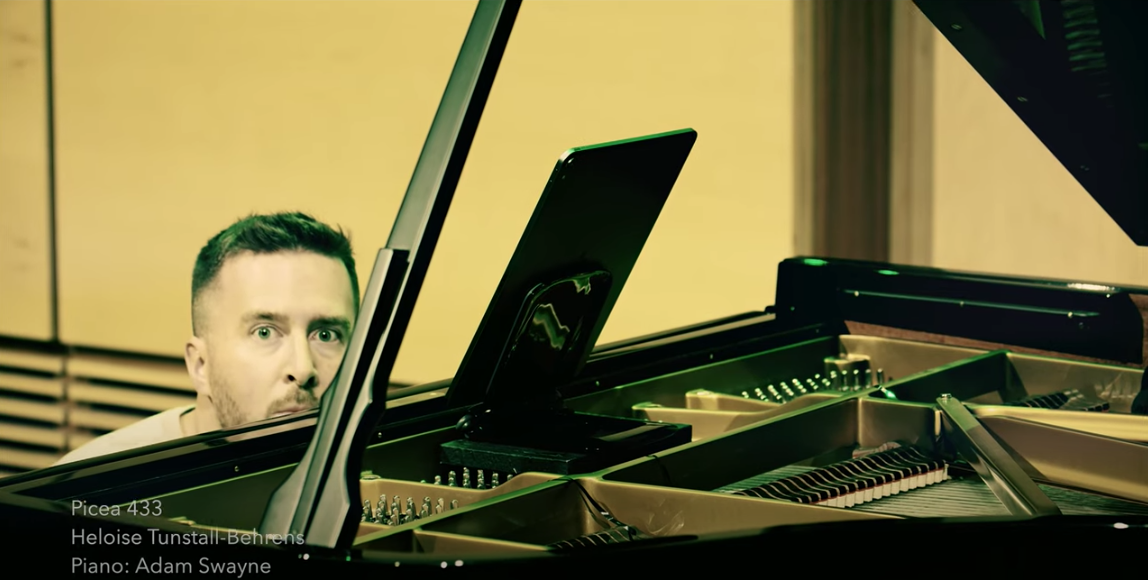 As hcmf// this year coincides with a lockdown across England, the festival is forced into a broadcast-only form on BBC Radio 3 and YouTube. The festival responded curatorially to the upheaval of 2020 by commissioning a large number of new works by a sweep of the UK’s youngish composers, to be performed by youngish ensembles and solo performers. A significant portion of this year’s programme is written by and performed by under 35s. Moving the focus away from international stars and onto local, younger talent is perhaps a taste of things to come as Brexit, coronavirus and the climate crisis join forces to make international travel, especially to and from the UK, more difficult, expensive and harder to justify.

Spending nine months in his flat evidently contributed to Me Hollywood, Oliver Leith’s new piece for Explore Ensemble. Leith made recordings of domestic, intimate sounds – a drink being poured over ice, a shower being turned on, a door bell – looped parts of them and used the live ensemble to pick out pitches and harmonies inherent within them. The piece has a shambling quality with some wryly humourous moments: a sample of the plaintive descending major 3rd of an old fashioned doorbell, pitch-shifted to make a melody accompanied by the ensemble, is an absurd highlight.

Other composers managed to get outside: Hayley Suviste in Edgeland interviewed people about the tense relationship between nature and urban life in Manchester and Joanna Bailie walked around Berlin with her hand-held recorder for her piece Dissolve. Dissolve, also from the Explore Ensemble concert, combines urban field recordings, presented sometimes directly and sometimes electronically, processed with subtle pitch interjections from the live musicians. The relationship between acoustic instrumental sound, field recordings, and processed electronic sound is complex and unstable: Bailie puts the listener into an eternal present where all you can do is attend to each long, slow moment as it arises. I could have done without the spoken interruptions, describing the video part, which sounded a bit like readings in church: the music is profoundly rich by itself.

The natural world, and especially trees, kept cropping up. Lisa Robertson’s Scottish forest-inspired Heartwood, expertly played by Heather Roche, combines tropical bird-like calling and squawking in the highest register of the clarinet with sultry, fragmented melodies lower down. Georgia Rodgers’ electroacoustic piece Tonewood starts with field recordings made next to a local ash tree and gradually evolves into harsh electronic throbbing before exploring woody squeaks, scrapes and creaks made from string instruments. Heloise Tunstall-Behrens’ piece for solo piano Picea 433 (one of the YouTube ‘Zeitgeist’ commissions played by members of the Riot Ensemble) is inspired by a Norwegian Spruce. In the film of the piece, pianist Adam Swayne rises up from behind the keyboard staring, wild-eyed, directly into the camera. He plays fragments of rhythmic and repetitive consonant material on the keyboard, flosses a piano string with magnetic tape, triggers a boomy sample reverberating in the lower strings of the piano and puts on another t-shirt. Swayne cycles again through this material adding arm and hand gestures with his fingers splayed and pointing sometimes up and sometimes down, putting on more and more t-shirts before disappearing behind the piano. The overall effect is bracingly weird; the extremely discontinuous material of the piece drawn together by an impenetrable internal logic somehow related to the tree. Picea 433 is thrilling because Tunstall-Behrens is reaching, straining for a new expressive language, throwing everything she can at it, supported by an audacious and committed performance from Swayne.

Other intriguing work from the Zeitgeist commissions included Auclair’s Munganyinkais a Transformer. A piece for playback and bass clarinet it features a recording of the composer’s mother describing her escape from Rwanda to Congo during the Rwandan genocide, the clarinet often exactly matching the rhythm and intonation of the speech, like an intimate, personal history version of one of Peter Ablinger’s Voices and Piano pieces. Matthew Grouse’s piece, Left Right, Left Right, made with percussionist Sam Wilson, is a jittery combination of Wilson’s recorded voice in interview with Grouse, live speech, processed speech, costumes, video and practice pad drum rolls exploring Wilson’s neurosis in relation to elements of his performance technique. The piece leant perhaps over-heavily on Tim Cape’s piece, also made with Sam Wilson, Because That Is Perceived To Be The Hardest Part, but is nevertheless an engaging vehicle for Wilson’s laid-back virtuosity and charisma.

Lawrence Dunn’s piece Sentimental Drifting Music cuts out the nervy chatter in favour of absolute music and abstraction. Phenomenally well played by Explore Ensemble it consists of a continuous indistinct chorale offset by an endless pizzicato cello bassline. Dreamlike yet luminous, consonant yet microtonal, this is music you hear five days into a coronavirus fever when things could go either way. Dedicated to Martin Arnold, it borrows its muted melodiousness from the Canadian composer but eschews his formal ranginess and sprawl to create a tightly controlled, light-emitting jewel of a piece.

Ending the festival, and waving the flag for twentieth century modernism, were James Dillon and the London Sinfonietta, who performed his mammoth 50 minute, 70th birthday commission, Pharmakeia. Opaque and mysterious, the piece’s monumentality, fantastical drama and sheer bristling ego were unmatched across the rest of the festival. In an hcmf// dominated by intimate observations, muted anxiety and a tendency towards to the literal and explanatory I found Dillon’s faith in instrumental music to grasp something of the ineffable refreshing.

The german translation of this article will be published in issue #126, february 2021.