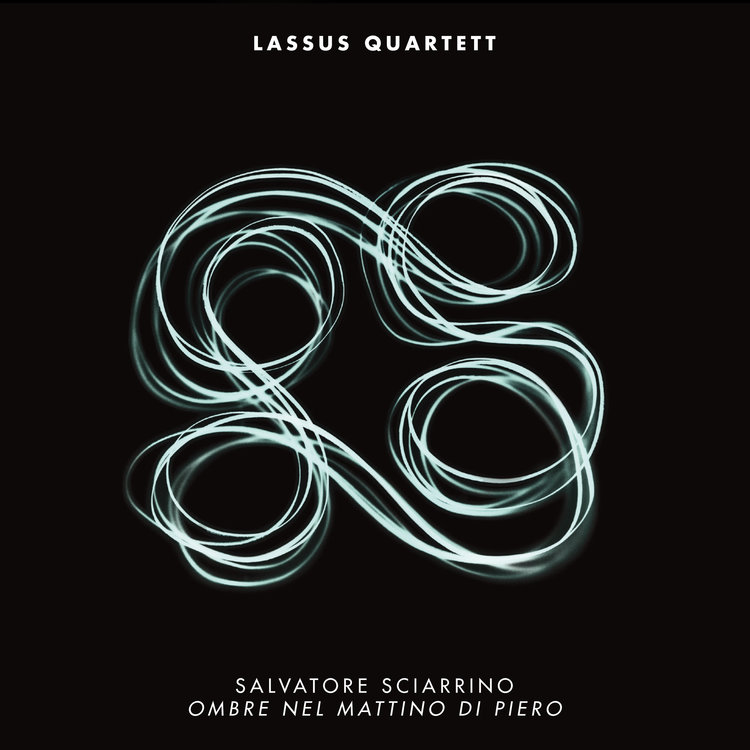 »It is the instruments themselves that breathe, wheeze: not who plays or who writes«

The Lassus Quartett seems to have taken Salvatore Sciarrino's words – from the composer's notes on his 9th quartet, Ombre nel mattino di Piero (2012) – as a command. This premiere recording occurred in a total silence from words. The album booklet features the bare minimum of the written word. It is the instruments that are left to breathe, exclaim, speak. The gestures and physical movements of each musician the conduits of communication. Arms and fingers taking the role of lungs and mouths.

A novel concept – recording an entire album in total silence. An accompanying black-and-white trailer complements and exaggerates the stillness of the five days of rehearsals and recordings. A silent film in the sense it is traditionally perceived – silent from the spoken word. Shots of empty fields, a cold church, a silent meal are intertwined with footage of the rehearsal and recording process, where gestures and movements replace words, and at moments you see glimpses of the learning curve this new manner of communication must have been, where a word is mouthed for clarity of the point being made, but in the end another route must be fond.

»Stillness« is also the word that most comes to mind upon listening to the album. It opens with Johannes Ockeghem's Kyrie from his Missa »Mi-Mi« a 4. A four-voice renaissance meditation, whose meandering modality, regular cadences and frequent pauses drive the listener to breathe in unison with the quartet. It plays with the silences, gifting the listener time. The recording has a palpable intensity, but one that is underpinned by calm and concentration.

The beginning of Sciarrino's Ombre nel mattino di Piero then comes as a bit of a shock. Upon first hearing, I thought the first sound was a in-breath coming from the musicians – but it is in fact their instruments that take a breath. This does not quite prepare you for the complete change of tonality and the ear takes some time to adjust. The work is full of pauses, sharp intakes of breath, cries and wheezes, bodily sounds, rhythms that invoke a sensuality. It is all about time, and space, and breath, and silence. As the work continues, the focused concentration of the performance, evident from the recording, draws the listener ever deeper into Sciarrino's sound-world; with eyes closed it takes no time at all to transport yourself to the resonant church in Norway where the recording was made. The damp acoustic makes it feel almost live, the performance both warmly personal and raw, and cold and empty from its architectural surroundings. There is an intense clarity to every sound – the acoustic takes no prisoners, demanding precision – and the humanness of what is being played is almost uncomfortably mesmerising, as you try to work out what it is that is being said.

Sciarrino wrote Ombre nel mattino for the millennium of the Tuscan town Sansepolcro. In his own notes about the piece, the composer points to the fading meaning of ancient beauty, and signals to the need of opening space for the modern. Not knowing what will stand the test of time, what meaning will later be attributed, or if the work will even be remembered, the key concept he returns to is time. The pairing of a work from the Renaissance with a work from the 21st century is at its core also about time – a pairing that is conceptually reflective of the musical content of the two works that play with time and space through silence. To me, though, the concept does not quite tie in with the musical pairing. Listening to the disc does not bring a sense of cohesion, of a smooth musical trajectory that stretches across centuries, but is a rather jarring transition.

The Sciarrino leaves you wrung out, uncertain of what was said, but certain that it was important. From there, the disc jumps back into Ockeghem's Missa, this time the Agnus Dei. Though the tonality offers some relief, it feels a bit too far removed from Sciarrino's soundscape to complement it, and it instead interrupts the internal processing of the modern piece. Whether or not the transition was intended to be choppy, I could not make sense of it while listening to the disc. It is, nonetheless, a well-executed recording of a wholesome Renaissance polyphony.

Although I remain musically unconvinced of the pairing chosen for the disc – the contrast between the Ockeghem and the Sciarrino slightly too uncomfortable to be complimentary – there is an overarching quality to the works which gives it sense. The frequent pauses in the Sciarrino continue what was introduced by the Ockeghem – the conviction that silence is sound, and that space suspends time. It is a call to really listen, and to translate the language of the instruments, as only they are given a voice.

Hanna Grzeskiewiecz
Hanna is a freelance creative producer, tour and project manager, and occasional translator, specialising in contemporary classical music. She was born in Poland and currently splits her time between London and Berlin.